According to This Cat, I Have A New Cat 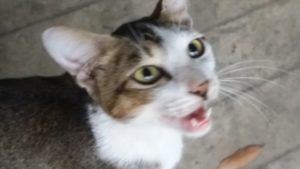 This guy started talking to my family and I like a business major at a networking event a week or so ago, and eventually meowed his way to being adopted. At first we just minded our own business because we thought it was just another stray, but he didn’t stop following us either, and almost died yesterday while crossing the street to get to us because a motorcycle almost ran him over. Dude had a RedBull-and-coffee heartbeat after we finally recovered him. Roast this clingy critter!

Apparently he is an abandoned house cat though, because it was super easy to train him. Now he just hangs around the yard all day, asks for food/cuddles, does tricks, and mostly follows me or my parents around when any of us are not indoors. He also tries to get inside the house a lot (and sometimes succeeds) even though he’s only allowed to be in the kitchen. For a cat, he can’t seem to handle large heights since he never climbs a tree over around 8 feet high and when he did because a dog was chasing him he was scared and we had to coax him down and grab him once he was in reach. The guy basically has dog software running on cat hardware.

Lesson learned though: sometimes all you gotta do is start the communication and ask nicely enough. Now he’s got food, water, a name, and a place to stay. 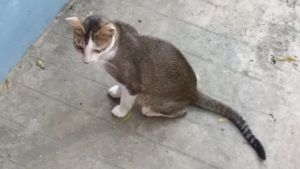