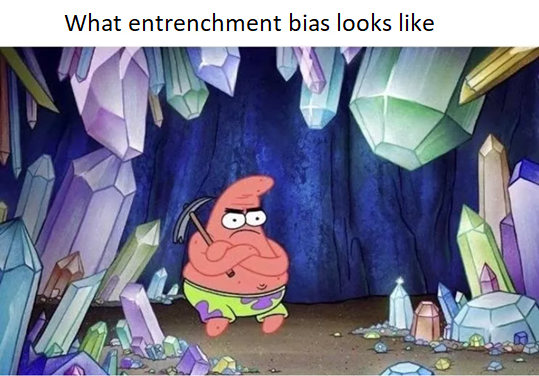 I once met someone who insisted that I would never be successful in life because I chose to pursue engineering. To paraphrase this person’s logic without the vivid expletives, “engineering is for losers and nerds who don’t have a life” and the only real path to success was pursuing studies that (according to the person) would quickly make you rich, such as but not limited to finance, and then grab the most stable, well-paying job that could be found. It quickly became clear to me that there was no reasoning with this toxic individual. You may choose to not believe that this scenario actually happened, but after I met an old lady near the neighborhood I live in who thought engineers were actually car mechanics, not many things surprise/exasperate me anymore.

Glaring biases about engineering and STEM aside, to me the more disturbing fact was that this person refused to reconsider his/her view despite an overwhelming abundance of evidence to the contrary. After reflecting upon this strange and unfortunate encounter for a while, I finally understood how some of the most pressing issues we face in modern times are sometimes exacerbated by the fact that it can be very diffcult for some people to question themselves and their worldview.

To illustrate my point, I invite you to try this simple test from the New York Times.

The rule was simply that the sequence must consist of numbers in increasing order.

To many people, confirming the null hypothesis (increasing powers of 2) was sufficient without testing the alternative hypothesis that they could be wrong, which would result in the uncomfortable result of the quiz telling them they were incorrect. This is a classic example of confirmation bias. Of course, this test is not meant to discourage people from pursuing STEM, which is a complex career choice that cannot be determined by a simple test. However, a key aspect of STEM is the ability to test if you are right by trying to prove yourself wrong. In computer science, for example, a variety of methods such as black-box and glass-box testing are used to ensure the robustness of written code, and in the natural sciences many experiments are designed to attempt to disprove the initial hypothesis. This is unpalatable to some people, who entrench themselves by actively attempting to avoid anything that would call their viewpoint into question.

These are the people who should not pursue STEM. Not unless they become willing to cultivate themselves differently, at least.

It is true that we sometimes see patterns where there are none, and fail to see patterns that are too subtle to notice with a cursory observation. No one is truly free from cognitive bias, but many tools are available to identify and confront our own biases. Utilizing these tools extensively in decision making will lead to better outcomes for everyone involved and enable informed, productive discussion instead of entrenchment. Educating children with these tools will better equip them to productively pursue STEM careers, as opposed to naively believing that liking classroom and extracurricular lessons/demonstrations in STEM is sufficient reason to pursue STEM professionally.

Cheers! Will be posting very soon about MicroMasters Milestone 4, which I recently just completed.