Hello! It is Wednesday where I am, and I have finally recovered enough from a high fever to get back at Shweposting. I apologize because I am fully aware that my posting schedule has been fairly inconsistent, but life kept throwing new challenges at my family and myself such as me getting sick for all of last week and the passing of my grandmother (aged 97) this Monday. Regardless, I will do my best to keep the blog and site updated on at least a semi-regular basis because apart from the unexpected support I have received from a small but dedicated reader base that continually motivates me to improve and post new content, making blog posts and improving the website in general has become somewhat of a cathartic experience for me. Today, as a continuation of the MicroMasters series of posts, here is my take on the fourth course in the MicroMasters in Manufacturing series, Supply Chains in Manufacturing I.

This particular course was somewhat similar in flavor to 2.854.1x from a while back, but delved more into variability and resource constraints with a new set of operational models, such as but not limited to the modified Guaranteed Service Model (GSM). The course content definitely opened my eyes to why many companies operated the way they did, especially in today’s world where many modern manufacturing companies follow very similar principles and models to the ones taught here–for example, many manufacturing firms that put an emphasis on lean manufacturing and line optimization extensively utilize supply chain distribution principles. I have provided a small sample of my notes below as well as the syllabus PDF file for further perusal. 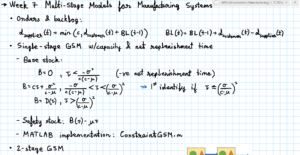 While I was working on all this, however, I also decided it was a great time to to conclusively demonstrate a working competence in Python programming instead of having to prove myself and back up what I put on my resume several times over. I did not get the chance to enroll in CS 1331 back at Georgia Tech due to scheduling issues, so instead I enrolled in MITx 6.00.1x which seemed to be roughly equivalent. Even though I had some limited experience with Python before along with a fairly good grasp of programming concepts due to working extensively with MATLAB beforehand (please don’t fight me I really learned things like recursion and iteration with it even though there are definitely some fundamental differences with object-oriented languages like Python), this course was honestly fun and appropriately challenging. It covered everything that could be expected from a comprehensive introductory course in object-oriented programming (data structures, objects, methods, inheritance, intro to computational complexity, etc), with a little bit of emphasis on data science and visualization. 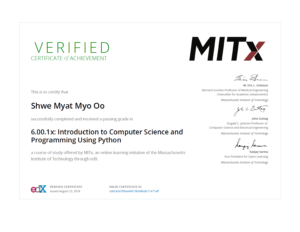 Also, shown below is how to NOT approach learning a new programming language 😀 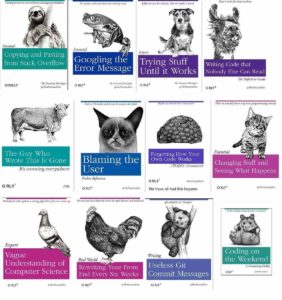 So yes, I guess I have been keeping myself busy so far outside of work. There won’t be any more MicroMasters posts for quite a while though, because course #5 out of the remaining four courses does not start until late October. I do have plenty of other content in the meantime to upload and discuss, however, so I will definitely still be around adding content to the web that no one asked for 😀